More than 5,000 global delegates from across the mining value chain attended Mines and Money events last year. In this series, we analyse the opinions from the floor expressed through interactive polling. Here's what the mining industry had to say about commodity prices and trends in 2019.
Chris Hinde
Chief Commentator, Mining Beacon
Follow

This is the first of five articles on the forecasts, and opinions, from Mining Beacon's 5,000 registered delegates at its eight conferences during 2019 in Hong Kong, New York, Helsinki, Vancouver, Brisbane, Melbourne and two in London.

Mining Beacon regularly polls the views of delegates at its conferences, and because of their level of seniority and expertise (not least from regularly attending expert presentations) these opinions have significant value.

The polled delegate opinions have been divided into five categories: commodities, countries, companies, technology and mining generally. In this first summary, we look at the poll results on questions related to commodity prices and trends.

Gold is a perennial favourite at mining events, and was the first poll question at Mines and Money Asia in Hong Kong during April 2019. Delegates were asked for their opinion on the gold price for a year later (i.e. April 2020), and all of those polled agreed that it would be over US$1,400/oz (which seems highly likely to be correct). 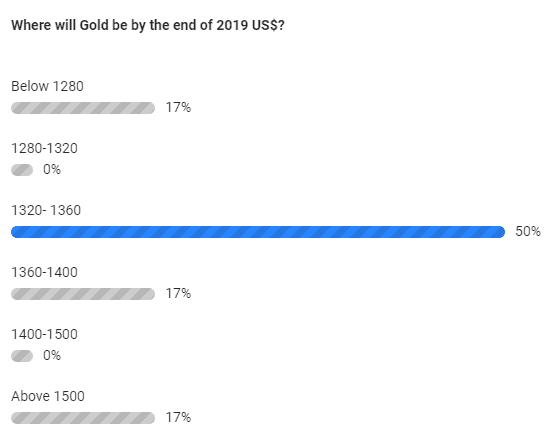 The International Mining and Resources Conference (IMARC) in Melbourne during October 2019 had 1,500 registered delegates at the conference amongst 7,000 event attendees. Respondees to a poll on the commodity with the 'top projects' over the previous 12 months voted overwhelmingly (59%) for gold, with nickel and copper being significantly behind on around 15% each.

The Takeaway: Gold soared in the middle three months of 2019, rising from US$1,300/oz at the start of June to over US$1,500/oz at the beginning of September, having been trading at barely US$1,200/oz in October 2018. It is little wonder that delegates almost universally (and correctly) forecast its continued rise into 2020, and the consensus amongst analysts is that the precious metal will not peak until 2021.

The market for electric vehicles (EVs) is, of course, crucial to the performance of battery metals, and so was also a regular topic at last year's Mining Beacon events. 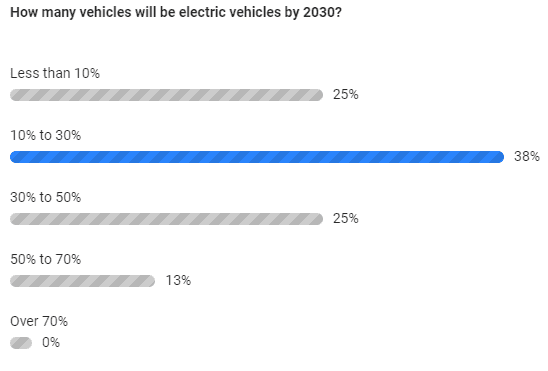 When asked if they would buy an electric car, 46% of IMARC delegates said "yes" (although none already had one), with a further 49% saying "maybe". Only 6% said "never".

Delegates at Energy Mines and Money in Brisbane during June 2019 were asked for their view of the "hottest battery metals". Over 30% of the respondees opted for lithium, although copper, cobalt and vanadium also scored well. In contrast, when asked which battery metal they were most bullish about, half of the Mines and Money New York voters went instead for nickel, although copper also scored well. Unlike the Brisbane voters, New York voters ranked lithium and graphite as the battery metals about which they were least bullish.

At Mines and Money London, half of the delegates opted for copper as the most attractive battery metal over the next three years, with a further 25% selecting lithium, and votes also going to nickel and graphite.

Discussions about lithium were a regular theme at Mining Beacon's conferences last year. However, despite a series of expert presentations, delegates at Mines and Money Asia were uncertain about the market, with 40% saying they thought it was oversupplied, 33% that it was not oversupplied and 27% unsure.

Indeed, delegates at several of the conferences were undecided, overall, on the commodities they felt most bullish about. For example, votes at Mines and Money Asia went to eight different metals, and delegates at Energy Mines and Money were split between gold, uranium and lithium.

There was also uncertainty among delegates about markets generally, although politics and the global economy featured regularly at the Mining Beacon events in 2019. Delegates seemed divided about whether Donald Trump will get a second term as US President, for example, and there was also disagreement over the benefit of President Trump to the mining sector. None of the Energy Mines and Money delegates voted that he was "good" or "excellent" for the Australian sector, with 50% voting that the Trump Presidency was "average", 17% "poor" and 33% rating his tenure as "bad" for Australian mining.

The Takeaway: In the event, sales of EVs were very disappointing in China last year (demand stalled after the government halved subsidies in mid-2019). Demand in Europe, however, has continued to meet expectations, and it seems highly likely that there will be a supply shortfall for most battery metals by about 2025. It remains uncertain, however, which of the commodities will see the steepest price rise.

Do you agree with the opinion of our delegates in 2019? Comment below to let us know what you think about the polling results.

Previously editorial director of Mining Journal, and more recently head of S&P Global Market Intelligence's metals and mining team, Chris is now Mining Beacon's editor-in-chief and lead commentator. He posts two blogs every week, one on Monday reviewing market conditions over the prior week, and a second on Thursday looking at issues on the global mining scene. There is also a quarterly blog on business opportunities in the sector.

Mina Booth
over 2 years ago

Thanks Chris - a really useful article, I'm looking forward to readng the next one. It woud be interesting to get Lucy Crane'e view on the Litium market.

It has been gold's year

More than 5,000 global delegates from across the mining value chain attended Mines and Money events last year. In this series, we analyse the opinions from the floor expressed through interactive polling. Here's what the mining industry had to say about commodity prices and trends in 2019.