Can the Mining and Resources Industry Support Australia in Becoming a Hydrogen-Based Society?

COVID-19 has created real and tangible evidence of the benefits of decarbonisation on the environment, with some obvious examples such as significant reductions in GHG emissions across the world and improvements in water quality from testing stations

Ahead of the International Mining and Resources Conference (IMARC) Online at the end of this month, we asked our experts how decarbonisation has fit into business’ strategies in 2020 and going into 2021, especially within the mining and resources’ sector.

“If anything, COVID-19 has created real and tangible evidence of the benefits of decarbonisation on the environment, with some obvious examples such as significant reductions in GHG emissions across the world and improvements in water quality from testing stations,” said Nick Smith, the Executive Director of the Growth State and Low Carbon Transition Division within the South Australian Government. “This chart shows the short-term impacts of the covid-19 lockdowns on CO2 emissions.” 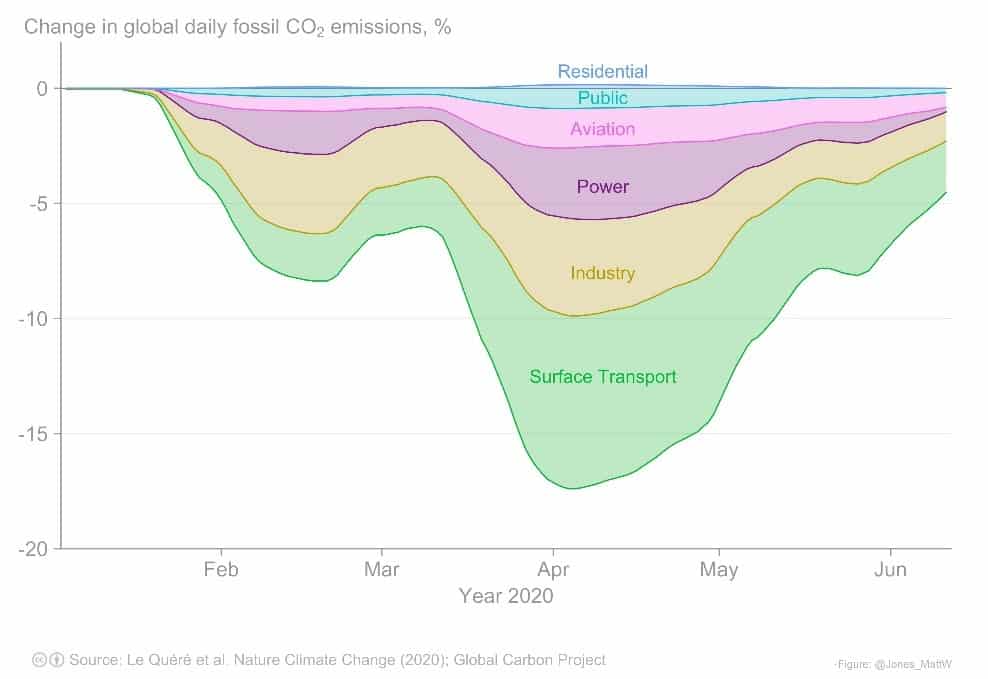 “Across the world we have seen more governments and businesses committing to a net zero carbon future, with the UN Framework Convention on Climate Change (UNFCC) reporting in September 2020 that the number of commitments had “roughly doubled in less than a year””.

Nick said, “Increasingly, the impact of low cost renewable energy and the ability to deploy this commercially across organisations is increasing interest in electrification and decarbonisation planning from our perspective in South Australia, where we are leading the world in high penetration renewable integration into our energy systems.”

“We have seen strong interest from across industry, researchers and government to develop consortia that look to enhance research and development, share risks associated with technology adoption and increase collaboration to share learnings and facilitate faster adoption rates of decarbonising technology,” he said.

Importantly, Nick pointed out that stimulus response from many governments around the world has included a specific focus on increasing the uptake of renewable energy to help hasten the decarbonisation of industry and “prepare economies for the adaptation to a lo emissions environment which provides opportunities for green energy and minerals production from Australia.”

He went on to explain that “There are a number of Cooperative Research Centres and alternate collaborations across Australia, that have strong industry input and focus to identify opportunities and commercially pragmatic ways to decarbonise the mining and resources sector.”

“We have seen South Australian based companies such as Santos, Oz Minerals, and GFG Alliance leading the way with plans to capitalise on the future decarbonised economy commitments from local and international governments, whilst focussing on improving the economics and productivity of existing operations.”

“Opportunities to better manage input costs and reduce exposure to volatility related to global diesel prices through adoption of renewable energy will help to increase certainty for future investment and present options to open up more challenging remotely located resources. Whilst commodity output pricing can not be controlled, having certainty over resource production and input costs does assist boards and executives to make better informed decisions.”

“Globally, we are seeing heavy equipment producers already engaging with their customers, to discuss potential options for power units and fuel availability to better understand what they will need to produce in the future.”

However, Nick noted that there are definitely some challenges for the sector, including:

The opportunities for hydrogen in Australia seem quite positive, but there are still some concerns on getting there. So, what is Government’s role?

“South Australia has led the focus on developing a hydrogen industry in Australia since 2017 as a means of leveraging our natural competitive advantage in developing our world class renewable resources,” Nick said. “Hydrogen forms a critical piece of this as we look to support our local economy and other jurisdictions locally and internationally, that are energy poor with plans to decarbonise.”

“Hydrogen is such a flexible energy carrier and presents enormous opportunities to use this domestically across the mining and resources sector for transport, processing, integrated energy production with renewables and offers real value as a future energy export.”

Addressing the IMARC Online audiences on 26 November, Nick will speak further about how the South Australian Government is leading the work under the National Hydrogen Strategy, including its provision of around $40 million in grants and loans to hydrogen projects in South Australia.

Sun Metals are one of the few refineries who have made the hydrogen and renewables transition. Their Executive Director of Innovation, Mark Pope spoke to us about some of the benefits they’ve seen by making this shift across the mining value chain.

“As a very large consumer of power (2nd largest single site power consumer in Qld at ~1m MW pa) and power being our second largest cost outside of concentrate purchases, Sun Metals was heavily impacted by increased electricity costs,” Mark explained. “During a five year period the price had doubled, and we had to view options for cost control.”

“We viewed many options but settled on building our own 125MW solar farm adjacent to our zinc refinery. We did this as a commercially viable project,” Mark said. “We are furthering our renewable transition by considering purchasing wind assets.”

“Our hydrogen journey commenced around two years ago, when our South Korean based parent gave us the challenge to see if we could export green energy to them.”

“As at today the industry has not achieved global scale production and the corresponding reduction in capital costs. Having said this though, given the large number of energy companies looking to invest in this area, it will only be time before this newly developing industry follow a similar trajectory to the remarkable reduction in capital costs wind and solar have achieved.”

For other companies looking to innovate in this renewable energy transition, we asked Mark what advice he had for them, in particularly around operational or strategic points to consider.

“In Australia, mining and resource companies are good at creating scale and in this next wave of new energy called hydrogen, we need to consider what is the best way to build the supporting infrastructure for the industry,” he said. “For instance, what are the strategic locations and alliances needed to build and modify ports, compression facilities, access to cheap power and water.”

“Sun Metals has this year and into 2021 are heavily focussing on our refinery expansion. This project has been in the pipeline since 2018, so 2021 will be an exciting year to see those plans turned into reality.”

“I am sure there would be many people in this room know what it is like to bring complex, expensive capital project on-line, so it will also be another learning experience year for us. Our other focus is advanced manufacturing where we see technologies such as robotics, automation and AI as key leaver of innovation to increase productivity and efficiencies to make globally competitive zinc.”

Mark will be discussing the topic of decarbonising mining and the role of hydrogen in reducing emissions across the mining value chain at the International Mining and Resources Conference Online running from 24-27 November. He will be joined on the panel with Austrade’s Head of Energy and New Energy Technologies Michael Helleman, Fortescue Metals Energy Director Rob Grant and Australian Hydrogen Council’s CEO Fiona Simon.

Back to IMARC
Next

Sentient Computing: Virtual on the Move

Autonomous Data Capture for the Digital Mine wins Emesent Honours

Why Strategic Mine Planning Is More Important Than Ever

Mining Beacon
Mining Beacon
We use cookies to help improve your experience. By continuing to browse our website you are consenting to our use of cookies.
Learn more